Doing ESL New Year writing tasks is a good way to learn how to use new words. You will be able to learn words about the New Year so that you can use them better.

When you do writing tasks you can work slowly and really decide on the best word to use in each situation. This is good as you are not under pressure to give an answer quickly like when you are speaking, so while writing you can work slowly and learn the words. Therefore, writing tasks are an excellent way to learn new vocabulary when you have to work alone. If you need any help deciding what the best word is for a certain situation you can look at the list of words on the ESL New Year vocabulary page to chose the best one.

There are the following four activities for you to do on this page:

In this ESL New Year writing exercise you need to chose one of the three writing topics below and write as much as you can about it. Remember to use the New Year vocabulary and full sentences. The more you write and the more details you add, the more practice you will get at using the vocabulary, so spend plenty of time doing this task. When you have finished you can also try to answer the other two topics if you really want to get lots of practice.

For the next ESL New Year writing activity you need to read and understand the following passage and them write a summary of it. A summary should contain the main information from the original passage but be written using new sentences and new sentence structures. You should try to use different words to say the same thing. As the summary only contains the most important bits from the original it will be shorter than the original.

Celebrating the New Year in York

York is a very old city in the north of England. There is lots of evidence for over 2000 years of people living in the city. The city is important nowadays because it has a very big and old church (York Minster) in the city center and the city if located on the main railway line between London and Edinburgh. All of the city center is very old.

Often a group of friends will arrange to meet at a certain pub at a certain time. Then once everyone has arrived the group will spend the evening moving between the many pubs in the city center while having a drink in each one they visit. Alternatively, people may book a table in a restaurant and have a meal first before going out to the different bars.

Then, when it is nearly midnight, many of the people will start to make their way to the space around York Minster. This is quite easy to do as the city center is quite compact. There are very few places that are more than a fifteen minute walk away from York Minster (but it might take a bit longer to do the walk if you have been drinking a lot of alcohol). At midnight the bells in York Minster will be rung to welcome the New Year and all the people outside the church shout ‘happy New Year’ and maybe sing Auld Lang Syne.

For this ESL New Year writing task you need to look at the following picture and then write about what the picture shows. You need to describe what you can see in the picture as well as what might have happened before and after the moment that is shown in the picture. Use as much new vocabulary as you can and write as much as possible. 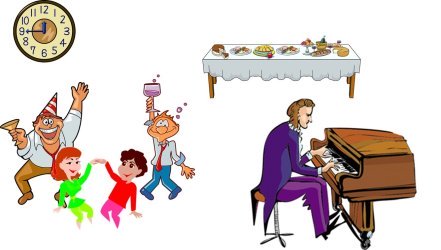 In the final ESL New Year writing task you need to write and act out a role-play. Below there are two role-play prompts from which you should chose one. Each of the prompts tells you what is happening, where it is happening and who is talking part. All you need to do is write what the people would say to each other. When you have finished writing your role-play you should get some friends and act out the role play so you can practice speaking the vocabulary as well as writing it.

Have your say about what you just read! Leave me a comment in the box below.